Convosphere has developed Cartosphere Network Analysis – a pioneering multi-platform solution to help brands navigate the social media landscape and track true influence. Forget having to pick between quant and qual research methods and being limited to a select few platforms in your social media intelligence projects. But how does it work? And how can it supercharge your social media listening strategy? In this post, our Strategy Director, Gareth Ham, gives you the rundown.

Social listening is all about understanding influence and segmentation.

This statement is reductive to the point of being wrong, but bear with me. As analysts looking at digital media, regardless of the precise campaign objectives, we want to understand exactly how a brand, an idea, or a narrative has changed minds, whether in terms of awareness, purchase intent or elsewhere in the funnel. This, of course, is influence. Secondly, we want to understand where that influence has been felt, in which communities or personas online. This is segmentation. On the contrary, if in a purely qualitative study, for example, an opinion online has not shaped another, or forms a meaningful segment of the conversation, is it worthy of analysis?

Frankly, I’m not sure, but I’ve long explained to friends outside the sector that our work “analyses influence”, regardless of the end application. Be it a social media account, news article, radio show or political speech; be it a ‘positive’ inclusive narrative, or a malicious campaign. When these two areas of analysis come together, we have the optimal conditions for understanding how narratives travel online, to who, via whom, and why.

We might understand this as ‘post-metric’ analysis. Broadly speaking, political parties have long been far better at understanding influence and segmentation than private enterprises. Faced with budgetary and resource constraints, and limited periods of time in which to campaign, electoral belligerents need to focus solely on voters that are considered to be ‘in play’; the small slice of the electorate that has not yet decided, can be persuaded, can be contacted, and will vote. In our parlance, the segment of people to target, and how to influence them. My time working in the private sector has told me that even advanced agencies and marketing departments remain beholden to Big Numbers: the likes, the clicks, the visits; bigger is better; the more the merrier. Why? Because it’s easy to understand, and more means ‘progress’, no?

Does the private sector need to better understand its ‘in play voters’? We might call them ‘on target’ or ‘desired’ audiences instead, but the premise is the same. When a comms team designs a campaign, whatever the objective, does it really know where its narratives go and who is being influenced? In a previous role, my team and I gradually worked ‘on-target audiences’ into our clients’ lexicon. When we ran a campaign for a packaging company that championed the environment, we were naturally interested in measuring its impact in these green online communities. When we used a global influencer to discuss a local hotel, we measured the resonance among local people, that might have a shot of staying there.

Sounds pretty obvious. We know who we want to influence, so we look at whether they have been influenced, no? But it’s too often not being done. Given the varying quantities of data available from social media platforms, it’s often difficult to define audiences from a measurement perspective. We have all the targeting information we could want when it comes to placing social media ads, for example, but once the campaign leaves your domain those options disappear. Earned media is even more opaque.

We do the math

Convosphere is increasingly turning to graph theory methodologies to understand narrative spread across online media. Graph theory, or network analysis, is the study of connections between data points. In social media analysis, it is often the study of engagement between online authors, or patterns within account following. Simply put, rather than focusing on metrics, we look at patterns of account-to-account, or site-to-site engagement on a given issue. The visualisation below shows a very basic social network.

The network gives us both segmentation and influence for free. The network naturally clusters into ‘modules’, based on common connections within the topic being discussed, rather than anything more subjective. The network structure also reveals its ‘bridges’. These are the social liaisons; the gatekeepers that bring communities together and help to disseminate narratives. These are our influencers; not based on social media metrics such as followers or engagement rate, or a more subjective understanding of importance, but based on an author’s ability to connect others, on this specific topic, in a specific time period, in a specific geographic area.

It’s a short step from here to understand how content flows through a network and its centres of influence. We can simply reconfigure the network or overlay data to visualise narratives. The image below shows exactly that: a social network has been decoloured, with the red nodes showing the entities that engaged with a specific social media post. Otherwise, the network principals are the same: below, you are simply seeing a larger version of Figure 1.

We now know the neighbourhoods that content may have influenced, and how, and can better tailor campaigns accordingly. We now know where influence sits among our audiences, measured not by following or engagement rate, but by their role in sharing narratives and content to target clusters.

Among myriad ways in which network analysis can further our understanding of social media and make listening more meaningful, this is arguably the simplest and most effective. Understanding your audiences, and target audiences, and how to influence them, should be the starting point for all social listening.

[Infographic] How does Cartosphere Network Analysis and how can brands use it to optimise strategic success? 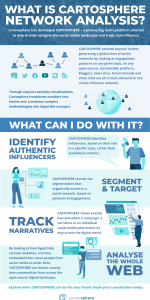