Currently dealing with the spread of a deadly mosquito-borne disease, Brazil is going through one of the most severe outbreaks of Yellow Fever for decades and it is affecting areas traditionally not considered at risk. Although the disease cases decreased throughout 2017, they reappeared towards the end of the year. Urban areas surrounding the large cities, such as São Paulo, have been particularly hard hit by the epidemic.

To explore the landscape of conversations around Yellow Fever in Brazil, we turned to our social listening tool with a set of questions: 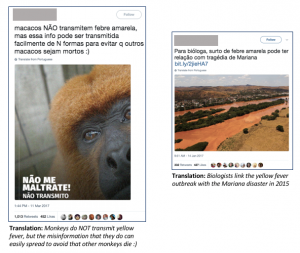 A notable 15% of social media posts discussed monkeys, namely their role as the primary host of the disease in its jungle form. The fast spread of the misinformation that monkeys were the cause of the epidemic drove some people to kill the animals in a desperate bid to keep the human population safe. Campaigning for the monkeys’ safety, some social media users pleaded the monkeys’ innocence and argued that, rather than posing a threat, the animals are in fact allies in the fight against Yellow Fever since they serve as an alert that the disease is spreading in that area.

Another common topic in discussions around the cause of the outbreak was the Mariana mining disaster in 2015, with 54% of conversations around the environment and climate referencing the tragedy of the iron-ore darn flooding in Minas Gerais state in connection with the Yellow Fever outbreak.

The buzz around prevention measures

In 2018, the Brazlian Ministry of Health announced an agenda of mass Yellow Fever vaccination campaigns.

As the timeline shows, conversation about Outbreaks fuelled discussions about Prevention measures. Throughout the year, Prevention saw higher volumes and longer duration peaks than Outbreak. Both topics peaked in the New Year and are still on an upwards curve.

Looking at social media sources only, we identified some key issues discouraging people from getting vaccinated. The most common reason putting people off were the queues at the health centres where the vaccinations are provided. In fact, complaints about the long lines were found in over 7,000 mentions, with many speaking out against having to wait for hours in the scorching Brazilian summer sun. 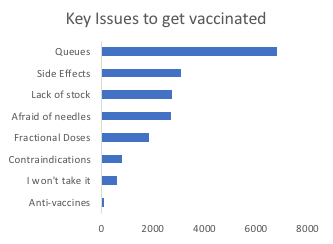 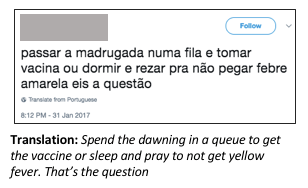 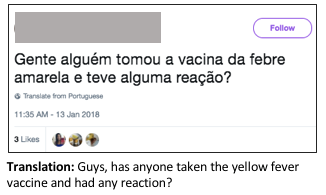 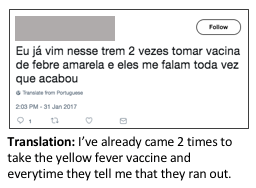 Additionally, people shared their worries about any potential complications associated with the vaccine. More than 3,000 mentions questioned the side effects, such as numb limbs, or even cause of death. Others revealed their fear of needles, questioned the limited availability of the vaccine at some health centres, and discussed the effect of fractional vaccines.

Vaccines the most talked about prevention method

Interestingly, within the urban areas the virus is transmitted via Aedes aegypti, the same mosquito that transmits dengue and zika. Yet only 1% of the entire social media conversation mentioned the Aedes aegypti mosquito and as little as 121 posts referenced the risk posed by standing water and limiting the build-up of these as a way to fight the potential Yellow Fever transmitter.

This infographic offers a visual guide to the Yellow Fever outbreak in Brazil.