This week we’re down to the last eight and there have been a fair few surprises along the way. In losing Portugal and Argentina, we waved bye-bye to two GOATs, Ronaldo and Messi respectively. Stepping into the limelight, at least for England fans, manager Gareth Southgate stole the heart of his nation, who are now hoping that nice guys finish first. Confusion reigned among many spectators who finally realised that Sweden and Switzerland are in fact not the same country, with the nation of flatpack furniture seeing off the watch experts in a timely fashion. But perhaps the biggest talking point this week is that Neymar loves a good lie-down with his time spent flat on his back clocked at 14 minutes since the tournament started. Let’s see what trended in Convosphere’s local markets.

It seems the manners of the Japenese football fans not only rubbed off on other supporters but also the teams. Despite losing the game to Belgium, the Japanese fans were highly appreciative of the Belgian team’s good sportsmanship.

“Japan vs. Belgium. Belgian players after Japan got defeated. Thought they were going to share their joy with their teammates, instead, they came straight to Japan team. Really great country. I felt that they are great players. Belgium, please win the championship. #WorldCup #Final16FirstGame #JapanVsBelgium #JapanTeam #BelgiumTeam”

Thanks to the World Cup cameramen, this intense Brazilian fan has found fame as a viral sensation. Dubbed the Hexa Psychopath, he’s said to curse anyone who gets in the way of Brazil’s march to a sixth World Cup title.

“Who was the best of the game:

Despite being hailed as an immovable trunk, goalkeeper De Gea could not stop Spain’s exit at the hands of the host nation in a penalty shootout. In fact, it was the Russian goalkeeper Akinfeev who proved the hero of the night.

There’s no denying the striking resemblance of the Danish father and son goalkeeping duo. Now, this football newbie might have added a new member to the Schmeichel clan, even if there is some confusion about the spelling.

“I don’t know a lot about football, but I have learnt that Kasper Schmeichel is the son of Peter Schmeichel and that he’s, therefore, the nephew of Geord Schmeichel (RIP).”

The royalties are coming home – UK

It seems Skinner and Baddiel’s Euro ’96 anthem holding two spots in the UK’s top 10 music charts is getting on the nerves of some England fans, with this among one of many creative memes expressing their annoyance. We’re not sure the composers of the tune mind that much. Kerching!

Meanwhile, outside the Twitterverse in Asia, it was all about Neymar… 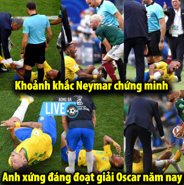 “The moment Neymar proved he deserved an Oscar this year.” 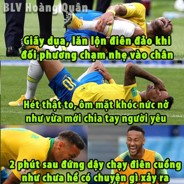 “Rolling in agony when his shin got lightly stepped on. Screaming, bawling his eyes out as if he just broke up.

…as well as in China.

“Neymar has fallen and rolled around on the ground for around a total of 14 mins during the World Cup,

With the meat of the tournament now upon us, our next update will be when the champion has been crowned. The Convosphere team are keeping their fingers firmly crossed for our home nations – Brazil, Sweden and England!