Here at Convosphere, we love getting nerdy. We make no secret of our passion for social data and cultural and linguistic nuances. Ask anyone in the team and the answer will be the same: we get a kick out of digging deep into any topic to reveal actionable insights that can make a difference to our clients.

So dedicated are we, that when the Spanish film “Los Japón” opened in Spain, our first thought was that it would make the perfect case study for cross-cultural social listening and audience analysis. Set in modern-day Spain and Japan, the light-hearted rags to riches comedy, by Álvaro Díaz Lorenzo, tells the (partly true) story of thirty-something Andalusian man Paco Japón who unexpectedly learns that he’s the rightful heir of the recently deceased Japanese emperor. The Japóns’ move to Japan’s Imperial Palace and Paco’s crash course in how to be an emperor set up a line of cultural and linguistic clashes intended to give viewers a laugh. However, judging from the online conversations about the movie, it seems the humour and jokes failed to resonate with a large portion of viewers.

There was a build-up of curiosity months ahead of the official release, mainly driven by the opening of the comedy at Malaga’s Film Festival and the trailer.

So, which were the most talked-about topics related to the film?

Conversations about the trailer had a fifty-fifty sentiment split between neutral and negative mentions. Among the negative comments, complaints about adverts for the film appearing on YouTube were common. But some were simply unimpressed and said the trailer was as bad as the movie. This commenter felt the trailer served as the perfect warning not to see the film.

“People who, after watching Los Japón, said it was bad and that they would not recommend it….But…after watching the trailer, didn’t you come to the same conclusion???”  Twitter

Spanish cinema fans are familiar with culture clash as a movie genre and “Los Japóns” was widely compared to similar productions, such as “Ocho Apellidos Vascos”. Generally, the theme was regarded as overdone, exhausted and in poor taste. But even among those who considered the genre archaic, some were reluctantly drawn to “Los Japón”:

“It would be good if we stopped dealing with the issue of cultural shock with comedies that simply reproduce sourpuss stereotypes, but, beyond this, #Japan is a very careful production that manages to entertain.” Twitter

The perpetuation of racial stereotypes?

One of the most controversial topics of the film concerned the ‘unnuanced’ representation of the Japanese characters and traditions. Spanish viewers took to social media to accuse the filmmakers of disrespect, racial stereotyping and cultural ignorance, leading some to fear wider unrest as a result of the film.

“I wonder if the movie Los Japón could be the beginning of some kind of diplomatic incident.” Twitter

“Can you imagine the offended Spaniards with this but filling rooms to see ‘Los Japón’?: A makeshift flamenco tablao in the middle of the exit of Malaga’s airport? A  ‘Made in Spain’ bus that falls apart to make a very long road route? Spaniards who are called Gonzales and dress with the National flag?”  Twitter

“I just left the cinema after watching ‘Los Japón’. I do not recommend it, it does not contribute anything, at some points I feel that they disrespect both cultures and put unnecessary messages, showing that Japanese culture is not really understood (although they try to pose it as a conflict between cultures” Twitter

In Japan, “Los Japón” was never released, and the only notable peak reflects the reactions to the trailer, which saw a sharp rise in views after it was shared by a local influencer @LaEsponesa. The influencer had created her own subtitles and expressed her fascination with the Spanish people’s perception of Japan. The tweet quickly went viral, garnering two thousand retweets and close to four thousand likes.

Making the emperor the central focus in a comedy intrigued commenters. The shock value helped drive the interest as many were surprised to see the imperial family as the premise for a light-hearted film.

“Looks interesting! It’s a bit surprising to see a trailer like this, as in Japan, the imperial family is somewhat regarded as ‘untouchable’ when it comes to comedy material. I will definitely watch it..” Twitter

Whereas the Spanish audience were quick to criticise the production for its alleged prejudice, stereotypes and cliches, Japanese expats in Spain were more forgiving. They understood the cliches were played for laughs and enjoyed it as lighthearted fun.

“The comedy movie “Los Japón”, in which the Spanish reign as emperor of Japan, has been released. Looks a little interesting.” Twitter

Although the majority of the conversation was positive, not everyone was pleased about Japan being subject to ridicule for the sake of entertainment. This outraged blogger encouraged readers to take action in an attempt to boycott the film.

“We’re going through a very difficult time debating how to maintain the monarchy in Japan – and this ignorant Spanish director made such a shitty movie to mock Japanese imperial family and Japanese people for their own laugh (….) let’s call and protest to Spanish embassy – such movie should not be released” Blog

Overwhelmingly, however, the reactions to the trailer and plot were favourable in Japan. Interestingly, had ‘Los Japón’ been released in the country it portrays, the film would likely have seen a more positive reception than it did in Spain.

Who talked about the movie?

Who were the people engaging in the movie conversations online? Our audience analysis revealed four distinct clusters in each country. 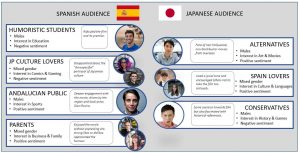 The clusters shared some similar traits by market. For example, the Spanish audience groups were humourous, prone to use a jovial tone and unlikely to partake in political discussions. On the contrary, the Japanese audience groups tended to be more culturally engaged, interested in art and politics.

Listening to the online conversation trends around your brand, product or service is vital in order to understand consumers and their preferences. This applies to films and TV-productions too.

By keeping an eye on the reactions to the trailer in Spain, the film company would have been able to prepare a response to the criticism expressed. They could also have avoided the inclusion of particularly controversial scenes in any promotional material as these would have further fuelled negative sentiment.

Likewise, by being aware of the conversation around the movie in Japan, the filmmakers would have discovered the interest expressed here. Releasing it in Japan, even small scale, would have likely resulted in a more positive reception overall.

Making the film available to a Japanese audience would also have made possible discussions between the audiences of the two markets. It’s possible that the Spanish audience would have been more accepting of the film if they knew about the Japanese’s appreciative attitude towards it.

Sophisticated audience analysis is ideal to inform marketing activities. Using the above audience groups as an example, the different clusters will help ensure the most relevant tone and content are used for each target when it comes to driving viewing intentions. For example, “Andalucia Public” is likely to respond well to any content that highlights their local region. Similarly, the “Alternatives” cluster may be prone to consume media that specialise in reviews of independent non-mainstream productions. Advertising in the appropriate channel will help maximise ROI.

Now that you’ve learnt about the different views about the film, are you tempted to watch “Los Japón”?

Alba used Audiense and Talkwalker to conduct the analysis for this blog post.

If you enjoyed this post, make sure you read our related posts on non-English social listening, viewing behaviour, consumer trends and audience analysis.

Based in Madrid, Alba has several years’ experience in digital marketing and market research, with a focus on social listening and qualitative methods. With a background in Business Administration and a masters degree in Strategic Marketing & Research, Alba helps clients in the insurance, consumer electronics and pharmaceutical industries.gain insight into the Spanish market.

Based in Madrid, Alba has several years’ experience in digital marketing and market research, with a focus on social listening and qualitative methods. With a background in Business Administration and a masters degree in Strategic Marketing & Research, Alba helps clients in the insurance, consumer electronics and pharmaceutical industries.gain insight into the Spanish market.