For Vietnamese startuppers, reality TV has become a lot more exciting thanks to Shark Tank Vietnam. If you’re not familiar with the original US version, Shark Tank is a show for entrepreneurs to pitch their ideas in front of a band of judges, or sharks as coined by the show, who will then decide whether they should invest in the proposed business idea in returns for a portion of the revenue or a partnership. The Vietnamese show follows the same format, and has generated major buzz online after only four seasons. For the show, social media acts as a main channel for driving awareness, word-of-mouth recommendations and viewing anticipation.

For any business entry, the first step to success is making sure consumers are aware of the new product, or in this case, the TV show. Shark Tank VN has no trouble with awareness, as the show’s social volume has been steadily increasing over time, peaking at the release of every new episode. To maintain interests during down time, Shark Tank VN actively updates the new episode schedule to build excitement and engage with the viewers. 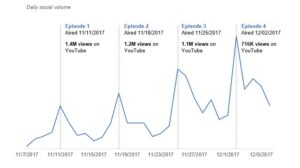 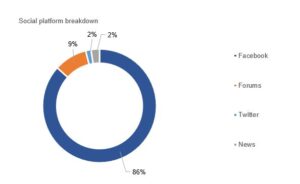 Facebook is the main channel driving conversations, stemming mainly from Shark Tank’s account which actively posts branded content and interact with fan comments. They also release official episodes (after airing on TV), on to their YouTube channels which, not only allows fans to catch up on missed episodes, but also eliminate the concerns for piracy. View count for previous episodes have gradually grown over time, with episode one reaching one million views by the beginning of December. Shark Tank happily announced the good news to fans, who responded by sending messages expressing their support and love of the show.

Knowing that the general Vietnamese public mainly use Facebook for social activities, Shark Tank can effectively focus communication efforts to drive buzz and engagement on this channel. So what do Shark Tank viewers talk about? Looking at Facebook, many viewers mention how much they enjoy the new reality show, praising its educational and entrepreneurial values in comparing it to other shows currently broadcasted.

The decisions of judges, or sharks as they’re called in the show, lead to heated discussions on Facebook and other online forums. Whether opinions are right or wrong, the exchanges between interested parties further drive traffic to Shark Tank page and increase the interest in the show online.

Perhaps the most valuable impact of Facebook conversations is word-of-mouth suggestions from viewers to their friends. The benefits of having an active brand account shine when viewers can tag their friends on Shark Tank’s page, which helps to raise awareness of the show while also influencing view consideration.

Besides interesting content that drives recommendations, viewers also show an affinity to the sharks, especially Mr. Le Dang Khoa who joined as a shark on the third episode. His charms, success and good looks have captured the hearts of many female viewers, giving them another reason to watch the show besides the business pitches. Other sharks also earn viewer affinities, giving them an opportunity to act as Key Opinion Leaders (KOLs) for the show and personal business ventures.

With its interesting content and charming hosts, it’s no wonder that Vietnamese viewers are always showing strong interests in the new Shark Tank episodes. When online viewers are vocal about their excitement, or “hóng” as used in many posts, their spontaneous intentions become quantifiable with social data. Intentions fluctuate over time depending on the new episode air date, but increases over time and shows the growing success of Shark Tank Vietnam.

So what does social media mean for Shark Tank Vietnam? First of all, maintaining an active Facebook page allows fans to introduce and suggest the show to others, which in turn raises awareness and view consideration. Sharks are influential members in the community who can attract different audiences with their charms and knowledge, and they can be leveraged as KOLs for future shows of similar fashion. Finally, quantifiable online intention to view can be combined with in-home broadcast data to effectively evaluate channel performance and tailor extra content to further drive viewer engagement.

Based in Ho Chi Minh City, Vietnam, Loc has 10 years’ experience in market research, both traditional and social data-driven, across a range of verticals, including entertainment, healthcare, beauty and electronics.

Based in Ho Chi Minh City, Vietnam, Loc has 10 years’ experience in market research, both traditional and social data-driven, across a range of verticals, including entertainment, healthcare, beauty and electronics.