Have you ever wondered, while drinking your fourth can of local, high strength, delicious beer, which of the recent craft brewery acquisitions generated the greatest impact across social media? I know I have. So I finished my (by now) fifth can, had a power nap, drank some water, ate bacon and egg on toast, drank some more water and then set to work.

The emergence of the global craft brewing industry is well documented and seems set fair for further expansion:

Craft brewers and associated specialist retailers place great value in their integrity, innovation and quality – all of which benefits consumers as we get to drink tastier, fresher and more original brews.

But there is a cloud on the horizon. Not surprisingly, Big Beer has taken notice and most have, over the past few years, acquired a number of independents. The most recent was Heineken’s purchase of a stake in Beavertown, producers of such delights as Neck Oil, Gamma Ray and the calamitously moorish Lupuloid. Heineken, for their part, claim a “hands off” approach to acquisitions, supporting with production levels and distribution chains but attesting not to influence product development.

The news provoked some consternation across the industry however, as purists bemoaned the loss of another independent from the brother/sisterhood. Award winning retailer Hop Burns and Black penned an open letter, eliciting great support from their own customers by taking this stance.

It’s the consumer response to Big Beer’s acquisitions that we’ll be studying in this post. Through the lens of social media analytics, we’ll be looking to measure the impact of and reaction to each acquisition. In doing so, we will answer:

Our analysis framework combines the following metrics with qualitative assessment of posts around each topic: 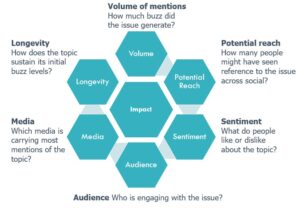 Of the more recent acquisitions, we have analysed the following:

Which acquisition drove the most reactions?

Ab Inbev’s acquisition of Camden caused the highest volume of reaction across social, the majority of which was Twitter shares of mainstream media articles. However, we also saw a little spat emerge over naming conventions with craft brewer Weird Beard and Brewdog’s delisting of Camden brews in its pubs also prompted some sharing and debate.

Heineken’s stake in Beavertown was the second most discussed instance, with 26% share of volume. However, Brewdog’s owner James Watt weighed in quite heavily on this occasion, sharing an article he wrote about integrity and independence. With almost 50k followers on Twitter, James’ intervention served to boost the visibility of the story. The aforementioned open letter from Hop Burns & Black also gained significant traction among their 7k followers.

And what of longevity? Did any of the acquisitions sustain buzz over a longer term? 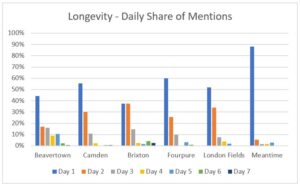 Analysis of longevity and media type share starts to paint a different picture in terms of impact of the different stories. While Camden garnered more mentions, we can see that almost 60% of these occurred on day one, when the story was released. Contrast this to Beavertown, whose curve was significantly less precipitous. 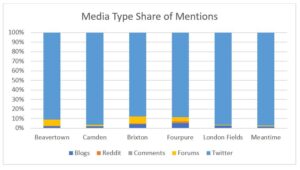 Likewise, social response to Camden resided almost exclusively within Twitter. Beavertown prompted more discussion in forums, where people tend to engage with a story in greater depth, a potential signal that the issue has impacted people in a more profound way.

But is this borne out by emotion and sentiment analysis? Due to the relatively low volumes associated with the other breweries, we are concentrating our analysis here on the “big two”, to see if we can discern different levels of emotional response. 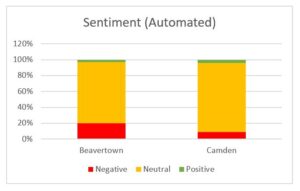 Topline sentiment gives us a starting point, with a cursory look indicating that while there was considerable neutral sharing of the news, the Beavertown story provoked a more negative reaction. 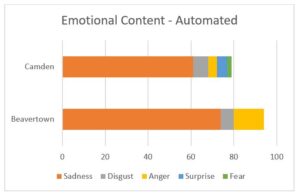 While a wider range of emotion was visible in Camden, we see a much higher volume of Sadness and even Anger within the Beavertown data, indicating this news was more a of gut punch to the audiences involved.

The final piece is understanding the nature of the audience of commenters. Who is creating the volume of social discussion? Are they industry insiders, journalists, Russian sexbots or normal, everyday, hardworking people who happen to like fine ales?

To answer this, we collected the Twitter handles of accounts to have referenced the acquisitions and ran a social graph segmentation to understand the main segments contributing to the discussion. 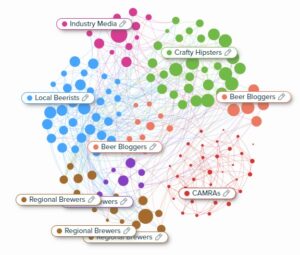 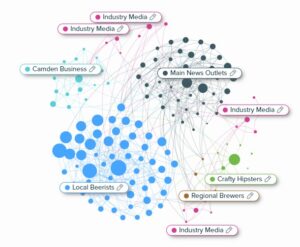 It is clear from this analysis that the Beavertown acquisition prompted more engagement from people rather than industry commenters and mainstream media. We saw a much higher prevalence among local beer fans, CAMRA members and Crafty Hipsters (who only liked Beavertown before anyone else did and even then, only ironically and then stopped Tweeting before anyone else did. Ironically).

Impact on intent or actual consumption

So, in summary while the “vanity metrics” such as volume and share of voice indicate that Camden made the biggest splash across social, a (slightly) deeper look at the more qualitative metrics shows that it was the acquisition of Beavertown which caused the greatest consternation among the key communities.

But how severe was this reaction? Do we see any signals indicating there would be an impact on intent or actual consumption of the brews across social?

The most negative responses did indeed contain a refusal to even countenance drinking the erstwhile crafts again, following their acquisition.

My take on it? Fuck Beavertown. Won’t be drinking their beer again and they won’t be missed. As far as I’m concerned, they are Heineken now. They were always a bit privileged, but now they can do one. Not interested.  Twitter

However, on closer inspection, most of the opinions provided were more moderate and revealed a level of empathy with the craft brewers, but deeper antipathy toward the intentions of Big Beer. We appear conflicted.

“For over 20 years I had to drink generic lager from an industry that was boring and tired. The only difference being the colour of the can or the badge on the glass. When Craft came along it was a revelation, at last beer that actually tasted of something. I was instantly in love, and now that feels under threat. Here’s a few things that concern me. What is Heineken getting from the deal? I’m sure they aren’t really interested in Beavertown’s dream or aspirations. I assume it’s for profit and thats what concens me. Alot of people, including me, have said that as long as the quality remains the same thats ok. But is it? Everytime we buy a Gamma or Neck now part of that price is going to Heineken. I don’t think I like that.”  Forum

“Can I condone putting money in Heineken’s pocket? No. Do I still want to drink the same Beavertown beers that I’ve enjoyed for 6 years? Yes. Should I be less emotionally invested in a business, in an ever changing climate? Probably. What is a person to do?” Twitter

To many, it’s a case of prioritising quality of consumption over concerns about ownership. It appears that people are more prepared to “compromise” on some ethereal sense of independence or freedom than they are on taste.

“Really not bothered by Heineken’s acquisition of Beavertown – they make damn fine beers that I’ll continue to buy as long as the quality is there. Huge fan.”  Twitter

Yet many craft fans are unwilling to touch anything in which the big boys have had a hand. But surely it’s entirely possible for a big company to produce a good beer, just as a small company can make a poor one. This comes across as an exercise in cutting off your nose to spite your face.  Forum

So, Beavertown’s part sale to Heineken was the most impactful story. Thoughts as to why? 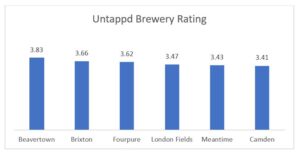