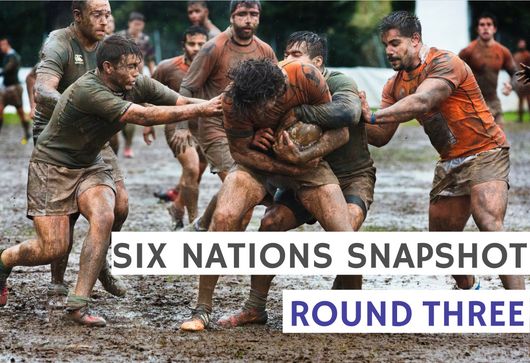 We’ve just had the third weekend of what’s shaping up to be an outstanding Six Nations Championship. Here’s our latest update on how fans of each country have been reacting to their team’s performance.

(Apologies to those of you anticipating similar analysis of the second round’s results, but the author is Welsh and has been inconsolable for a fortnight, unable to come to terms with losing to England, yet again.)

So here is our second installment reporting on the trials and tribulations of the poor fans, who are forced to witness heartache and ecstasy in equal measure throughout the tournament.*

The burning questions we asked after the first round were a) How long would the smiles remain on Welsh faces? b) Just how entitled are England fans? And c) Would Scotland witness another new dawn?

The answers: a) Just a week b) Surprisingly, not very c) Yes, and more besides

Firstly, it appears the tournament is building in terms of attention and engagement on social with more posts on this round than the previous two.

How did the fans respond and who was most upset/ecstatic?

Italy fans seem pretty well resigned to defeat before the game and expressed sadness at yet another loss that has them staring down the barrel at a wooden spoon. A French victory (at last) was greeted with enthusiasm by the long-suffering French public, although there was still considerable volume of anger over some fairly inept play.

It was a similar story for Ireland fans, who were very pleased with their team’s dominance but became increasingly surprised/scared and angry as Wales clawed their way back to within a score. The Welsh had a roller coaster ride – joy at the team flattering to deceive in the first half, anger as Ireland pummeled them in the second half and then surprise and delight when they threatened a shock victory.

Team and fan performance of the weekend undoubtedly goes to Scotland, having finally vanquished the auld enemy after so long. The only slight blip came as England stirred into life in the second half, prompting a sense of resigned anger as the all too familiar refrain of “snatching defeat from the jaws of victory” emerged. England fans were surprised by their team’s flaccid performance while many vented anger at some of referee Nigel Owens’ more questionable calls. They were, however, most (un)usually magnanimous in defeat, praising the victors for an outstanding performance. This is why we love rugby.

The biggest memes of the week?

Join us next week for a Welsh romp, an English backlash and a burst Scottish bubble.