So it’s true what they say, all good things come to an end. After five weeks of football frenzy, Sunday saw the long-awaited final of the FIFA World Cup 2018. The bookies’ favourite, France, were crowned the winner as they beat underdog Croatia by 4-2. Bravo, Les Blues! Croatia may well have been punching above their weight but despite being runners-up they impressed football fans around the world, including the country’s president who didn’t mind getting soaked as she embraced each player to express her gratitude in heavy rainfall. Another surprising pitch appearance was that of the Russian activist group Pussy Riot whose surprise visit during the second half served to remind viewers of the host nation’s poor record on human rights and extreme censorship. In Saturday’s third place playoff, Belgium secured bronze after a dominating display against England, who were forced to accept it wasn’t coming home after all.

So, which themes and tweets trended in our local markets? Here’s a look at the most notable ones during the final World Cup week.

Having seen the team leave the tournament early, German fans rallied around an unlikely hero with their support of Croatian player Luka Modric.

When he was 6, his grandfather was shot dead.

His family became refugees, in a warzone.

He grew up to the sound of grenades exploding.

Coaches said he was too weak and too shy to play football.

“One more game then the World Cup ends. Sad.

It’s the return of the Hexa Psychopath as this Brazilian fan, featured in last week’s recap, met with his favourite team’s mascot. Dubbed Canarinho Pistola (“Pissed Off Bird”) because of its intense facial expression, there’s no denying the striking resemblance of the feathered mascot and his new friend.

They did get a lot further than predicted, but the England team and their fans had their hearts crushed as it became clear football wasn’t coming home following their loss to Croatia last week. Kensington Palace’s encouraging tweet might have put a smile back on some of those faces.

I know how disappointed @england must feel right now but I couldn’t be more proud of this team and you should hold your heads high. You’ve had an incredible #WorldCup, made history, and gave us fans something to believe in. We know there is more to come from this @england team. W

Meanwhile, outside the Twitterverse in Asia…

These French football fans’ decision to streak in celebration caught the attention of China’s Weibo users.

”To celebrate the winning of the French cup, French fans are running naked in the street to share their excitement.”

In Vietnam, the countdown to the next World Cup has already begun. The college students, whose revisions prevented them from following the tournament as much as they would have liked, shared their jealousy of their younger peers graduating in 2022. Because it will be a winter World Cup, it won’t interfere with these youngsters’ exams. 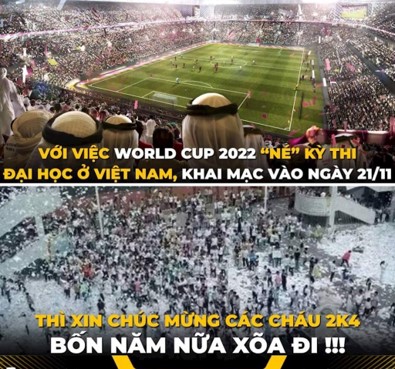 And, like the students, will be seeing you again in 2022! For those who can’t wait, there’s always the UEFA European Championships in 2020.