Riding high on the sustainable food movement, Swedish vegan brand Oatly has enjoyed a period of rapid international growth. Through their tongue-in-cheek marketing, combining traditional product promotions with witty off-topic observations and forthright statements about the company’s determination to tackle climate change, Oatly gained a cult following of ethically conscious shoppers who proudly wore the badge of the Post Milk Generation. But it doesn’t take much to see the tide turn and the brand that managed to bridge the gap between activist and mainstream consumerism is now facing a backlash. The reason? Their decision to sell a 10 percent stake of the company to controversial investment firm Blackstone. Public supporters of the Trump campaign and with alleged ties to Amazon deforestation, Blackstone was, at best, considered a “strange choice” for Oatly to partner with. The more outspoken critics accused the company of “selling its soul” and called for a boycott of the brand.

Four months after the news of the investment broke, the company’s uphill struggle to win back consumers’ trust looks steep. Despite avid attempts to defend the funding as an opportunity to “[make] the most change possible”, industry experts predict the brand will never return to its glory days of alt-milk world domination. Instead, they risk losing out to up-and-coming rivals who have capitalised on the now mainstream plant-based food trend that Oatly pioneered. Although Oatly might have understood the PR risk involved and considered it a gamble worth taking, the questions remain: How, when their marketing had been so on point (even dubbed ‘genius’) did they get the execution of the Blackstone investment announcement so wrong? What could they have done differently? And, crucially, what can they do to bounce back?

Using the case of Oatly to illustrate why a data-driven approach to keep a close eye on industry movements, and an ever-closer eye on your target audiences, is the be-all and end-all when it comes to building and maintaining a credible brand.

Brand activism is defined as a business’ efforts to promote political, economical and/or environmental reform to improve society. Also known as cause marketing, it’s an approach that has become the foundation of many FMCG brands’ communication strategy, It’s also an area where many brands have struggled after finding themselves unprepared for the fast-moving nature of social media where a single critical tweet can snowball into a million more in a matter of hours. There are numerous examples of companies that, after failing to appear socially conscious enough to appease savvy consumers, have become subject to ridicule and accusations of ‘woke-washing’.

Yet, through their branding campaigns, Oatly managed to steer clear of this peril for years. The brand convinced eco-anxious shoppers of their ethical credentials and genuine belief that they could change the world by getting more people to ditch dairy in favour of plant-based. Rather than putting consumers off, or confusing the message, Oatly’s irreverent attitude combined with their humorous and ‘nonsensical’ advertising proved a recipe for success. From vegan evangelists to baristas, from the US to Asia, people came together to proselytise about their hip new mylk discovery and word spread about the quirky newcomer.

Oatly had nailed their audience and were able to reap the rewards of the strong brand affinity. The Oatly community enjoyed a feel-good buzz that shone through not only on their own channels but also in fans’ posts. With hashtags such as #NotYourMomNotYourMilk and #DairyIsScary, Oatly drinkers shared photos of their morning ‘cappoatccino’ with their friends and followers. In a world where brands pay top dollar for influencers to help boost word-of-mouth (WOM) recommendations, the organic proactivity of Oatly’s fans was gold dust.

Positioning itself as a challenger brand, Oatly made people stop and think about their habits by offering them the choice to make a small yet important contribution towards improving the food industry as a whole – opting out of dairy in favour of oats. By inviting consumers and companies alike to join the debate around food and carbon footprint, the brand put plant-based on the agenda and arguably played a key role in the transformation of veganism from something kooky and niche to a mainstream diet alternative. There’s no denying that Oatly’s disruptor mindset won them many critics, but overwhelmingly, attitudes on social media were positive.

Then in July 2020 the wind changed. In a press release, Oatly announced that they had received funding of $200 million from investment firm Blackstone in exchange for a 10 percent stake of the company. The impact of the news was instant and, while Oatly most likely understood the deal would fail to impress their most hardcore fans, they were clearly unprepared for the enormous backlash that followed. Negative mentions grew by over 500% virtually overnight as people flocked to social media to learn more about the unexpected deal and express their disappointment in Oatly. 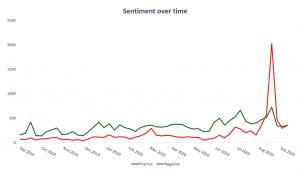 Positive and negative mentions of Oatly . The spike in negativity reflects the reactions to the Blackstone announcement. (Swedish and English, global coverage.)

Oatly was still busy dealing with the aftermath of the announcement when an even harder blow struck in early September. A Twitter thread, linking Blackstone to a controversial Brazilian infrastructure investment that has been accused of contributing to deforestation in the Amazon, appeared and quickly gained momentum (Blackstone denies the allegations). The situation was further aggravated by claims that the equity firm’s CEO is a loyal supporter of Trump and a major donor to the president’s campaigns. It wasn’t long before Oatly once again began to trend for all the wrong reasons.

oatly isn’t ethical …? i’m so disappointed😔it’s as if we’re living in some capitalist society with no ethical consumption😤don’t text

As the world’s biggest landlord, they are fueling the housing crisis, very much so here in LA. How does their destruction of the Amazon further the plant based movement? I know you’re just a social media person, but no, I will not keep enjoying @oatly milk and u should quit. 🚮

why did oatly do that??the institutions that i lean on have crumbled

Overnight, Oatly had gone from a quirky staple favourite of ethically conscious shoppers and coffee lovers to a ‘profit-hungry’ corporation willing to “sell out to the highest bidder”. It has been described as a textbook example of what happens when a purpose-driven business loses sight of why consumers first bought into the brand as soon as Big Money enters the picture. While it may turn out that Oatly was genuinely right to defend its decision as a chance to “change the world of finance” and “expand their sustainable mission”, experts have argued that the news of the investment could have been delivered in a way that would have caused less outrage and more acceptance – perhaps even excitement.

Past: How could social listening have helped Oatly avoid the PR disaster?

Now: What is Oatly doing to weather the storm?

In addition to Brand Tracking and Trend Analysis, which social intelligence-based methods should form part of Oatly’s long-term strategy?

Oatly need to be attentive of their followers and let insights about the Who, What and Where of their audience groups help them maintain, and in some cases rebuild, a close relationship with them. Publicly acknowledging customers’ reactions to the Blackstone investment forms an important part of this. When creating new content, the audience profiles will be of crucial help in creating tailored and personalised messaging. True for any brand or industry, consumers are more likely to be receptive towards content when they can relate to it.

Whether or not Oatly will convince the world they’re still the same “unrelenting oat punks on a mission” remains to be seen. But regardless of the outcome, the company’s PR ordeal offers some key learnings relevant for all brands, independent of size or industry.